T-Meeting back to focus on sprinting & jumping

Whit Monday is now a regular spot for the T-Meeting. After a special corona edition last year with a one-time added all-around program, the T-Meeting returns this year to the traditional focus on sprint & jumping events. It is almost certain that meeting records will be broken, but more important is the search for limits for the international tournaments next summer.

In the short sprint numbers we see a mix of mainly Dutch, Belgian and Irish athletes. Where Rani Rosius improved the Meeting Record in the 200m last year, this year she will attempt to break the record of 11.48 s in the 100m. She may also come close to the European Championship or World Championship limit. She will face opposition mainly from Tasa Jiya and Nargélis Statia. Leonie van Vliet is still looking for the limit for the 200m and hopes to find it at the T-Meeting next Monday.

In the men's 100m, Solomon Bockarie , Christopher Garia and Israel Olatunde will compete for the “Mr T” title. With claimed best performances (CBP) of 10.30 s, 10.34 s and 10.35 s, it's will be close. And with a Meeting Record of 10.29s, these athletes will also have the bonus in their sights. The split times on the 100m are back this year. An extra Electronic Time installation at 60m provides extra information for the athletes. Usefull to compare the performance with the indoor season and to do start and top speed analyses. Of course, this is in addition to the well-known tailwind arrangement.

Femke Pluim, reigning National Record holder, will try it again at the T-Meeting. She will compete in her event, the pole vault. She receives opposition from Killiana Heymans, holder of the Meeting Record. The somewhat younger athletes may still be able to achieve a limit, for example Kristina Tergau (U20) or the Belgian Ylio Philtjens (U18) by the men pole vault.

In the regular high jump we see the women Glenka Antonia (1.83m) and Nina Borger (1.82m). Antonia improved the Meeting Record last year to 1.82m, it would be nice if there is an improvement for this year. With the men we look, partly biased, especially at Mathijs Van Os. With an CBP of 1.95m, this athlete from the organizing association Attila may secretly look forward to the 2.07m for the EKU18 limit.

In the hurdles, especially the male participants stand out with many young talents in the short hurdles, led by U20 athlete Mark Scholten. At senior level, there are no fewer than five athletes in the short hurdles with an CBP below the current Meeting Record. Mark Heiden and Job Geerds top the list, with opposition from Germany (Blaise Gregory Minoue Minoue), Belgium (Francois Grailet) and Ireland (Matthew Behan). At the 400mh we see Sep de Jong who is looking for the European Championship U18 limit and the Ukrainian Dmytro Romanyuk with an CBP of 49.90 s, more than a second below the Meeting Record. Myke van de Wiel should not remain unmentioned either, she leads the list on the 100mH and broke the magical limit of 6000 points in the combined-event at the T-Meeting last year.

Every year, the organization receives special requests, this year including a request to add a special race for wheelers. We will start with that next Monday with a 100 meters at 11:00 and a 400 meters at 11:30 for five wheelers. The packed program with all sprinting and jumping events is then completed between 12 noon and 5 p.m., which ensures that several events are continuously in progress. An intermezzo is planned at 4:25 pm, with a kids run (600 and 1000 meters) building up the tension until the closing 100 meter finals.

Free entrance
Not only is the entrance free next Monday, the public is even welcome in the midfield area. Thanks to the focus on sprint and jumping numbers only, the midfield area is freely available and the organization is happy to open it to the public, in order to get even closer to the performances of all top athletes.

The organization expects enough spectacle and welcomes you to the athletics track at 48 Bernard Leenestraat in Tilburg. The competition can also be followed on the following social media channels: instagram , twitter and facebook .

Preparations for the 11th edition of the T-Meeting are already at full blast. The T-Meeting, this year on Monday 6 June, is an ideal start for a great season.

It is now customary for the sprint and jumping numbers to take center stage at the T-Meeting. After a special trip to an all-around side event last year, this year's T-Meeting returns to the focus on sprinting & jumping. This year's program includes the running numbers: 100m, 200m, 400m, 100mh/110mh and the 400mh. The jumping numbers are: triple jump, long jump, high jump and pole vault. For the youth there is a 600m and 1000m on the program.

Registration for athletes is now open →

Three days of top athletics during the Jom IT T-Meeting

The tenth edition of the T-Meeting took place on the Whitsun weekend of 22, 23 & 24 May. Several athletes have managed to resist the natural elements and set different Meeting Records as a result. With this review, we look back on an edition that we will never forget. 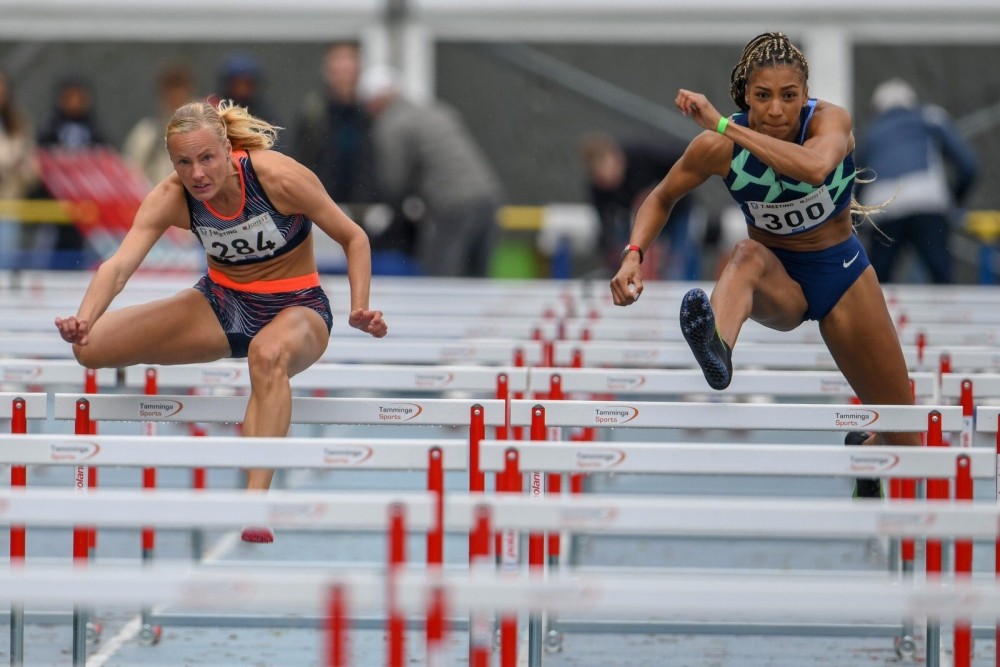 This anniversary edition of the T-Meeting deserved something special, that is what the organization thought. That is why an combined-event took place prior to the regular T-Meeting to respond to the limited offer in competitions. Highlights of this combined-event were Myke van der Wiel who broke the magical limit of 6000 points and Sofie Dokter who reached the limit for the EKU20 in Tallinn. Sven Roosen and Sven Jansons put down a sharp decathlon and qualified for the EKU23. Gabriel Emmanuel managed to surpass himself and qualified for the EKU20.

On Monday, Rani Rosius immediately set the tone with her time in the 200m: Meeting Records are there to be broken. With a time of 23.83s, she sets the bar high for future editions. The Meeting Record for both the men and women 400m was also broken by Nout Wardenburg (46.69s) and Sharlene Mawdsley (53.21s) respectively. On the technical numbers, Navaro Doulany Aboikenie started with a good distance of 15.68m on the triple jump and managed to set a new Meeting Record. Glenka Antonia chased him with a Meeting Record, but in the high jump. She flew over 1.82m and equaled her PB with this. Then Olympic champion Nafissatou Thiam closed the day by jumping no less than 6.42m and cashing in the new Meeting Record long jump. Jochem Dobber approached the Meeting Record in the 200m with seven hundredths, with 20.90s he ran a very tight half distance as 400m.

The organization can look back on a special and successful edition. Many thanks also go to the volunteers and sponsors who made this edition possible. Ultimately, the biggest thanks go to the athletes, who have made this edition one to never forget. Next year we will be there again, for and by athletes on Monday 6 June 2022. Hopefully with a well-filled track full of athletics fans, as usual!